Free Shipping on Orders Over $30

Share
Do your allergies seem worse the day after it rains? Have you ever noticed being in an area that’s damp and humid, like a dock or basement, causes you to start sneezing? A study from the Environmental Protection Agency (EPA) attributes 4.6 million cases of asthma in the U.S. to mold and dampness. In this blog, we’ll talk about mold allergies and why they’re so prevalent in Texas throughout the year.

What is mold?
Mold is a fungus that produces spores that travel through the air. Mold can grow in any damp environment and can grow indoors and outdoors. There are thousands of different species of molds, but only 4 common species that cause allergies.

Why is mold so prevalent?
Unlike plants, mold does not get energy using photosynthesis, but from the organic materials it lives on, such as rotting trees. Mold reproduces by generating many spores that travel through the air or water. Spores often cling to clothing or fur, and some can survive extreme temperatures by going dormant.

We often see mold growing on food left for too long and many of the ways we preserve food, such as using salt and vinegar, are meant to slow the growth of mold. Refrigerating food is also important because most molds have trouble growing at temperatures below 39ºF.

Benefits of mold
Molds play a huge role in our ecosystem by decomposing organic matter in order to recycle the nutrients for other plants. Many foods use mold in production, such as cheese, sausage and soy sauce. Molds are also used in pharmacology, such as penicillin and some cholesterol-reducing drugs.

Why is mold so hard to control?
Molds require water to grow and spread, which is why they grow so well after a flood. According to FEMA, molds can begin growing in damp or humid places within 24 to 48 hours of water exposure and will continue to grow until the source of moisture is eliminated.

Another aspect that makes it difficult to control is that mold loves growing on wood and fabric, which are abundant in indoor spaces. Outdoors mold will grow on anything that’s dead or decomposing.

What causes mold allergies?
Mold allergies are caused by mold spores entering the nose through the air, similar to pollen allergies. Your immune system may overreact to the spores by developing antibodies, such as histamines, which can cause a variety of symptoms.

Mold allergy symptoms may include sneezing, congestion, asthma, itchy nose, eyes or throat, runny nose, cough, postnasal drip, headaches and migraines, difficulty breathing, fatigue or even skin rashes. Sometimes symptoms may be delayed after being exposed to mold spores, and rather than a sudden allergy attack, you’ll notice your symptoms gradually worsening.

What makes mold allergies worse?
Being in an area where mold easily grows can definitely exacerbate mold allergies. Indoor areas that are often damp or humid, like a bathroom or basement, are usually the worst offenders. Combine humidity with anything that may hold water, such as paper, books or fabric, and you have the perfect environment for mold to grow and cause allergies. 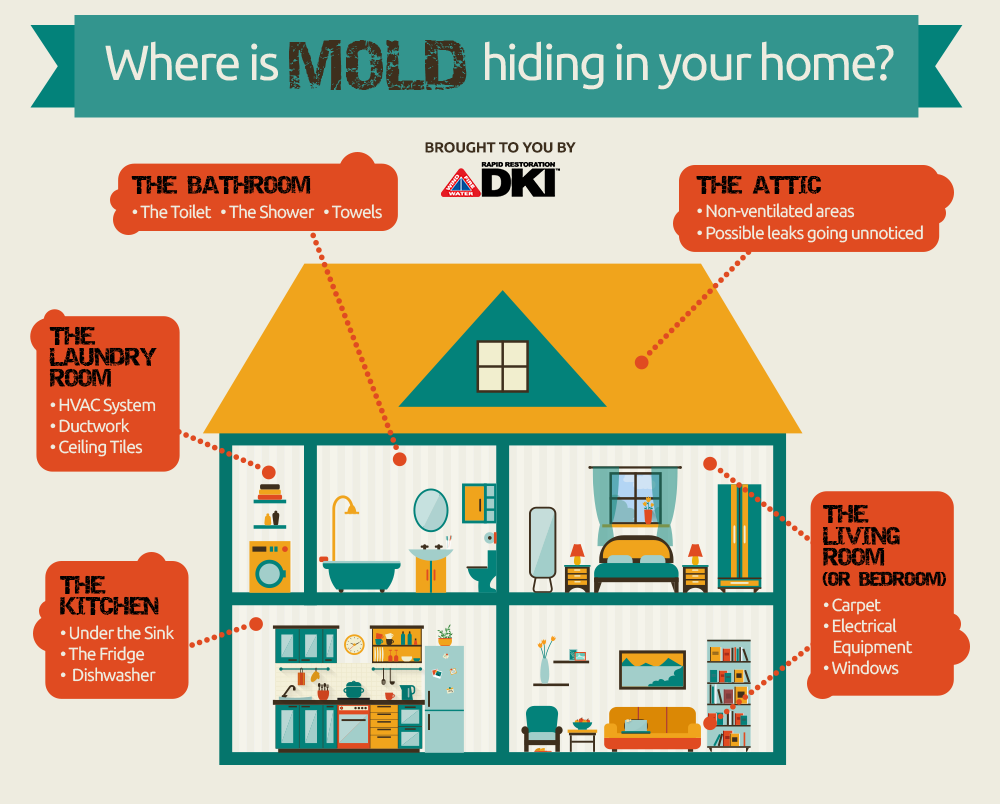 What are mycotoxins?
Certain types of mold can produce toxic compounds known as mycotoxins. Under certain conditions, fungi can grow into colonies and produce high levels of mycotoxins. Specific types of mold that grow indoors, such as on ceiling tiles, as well as on certain foods, can produce mycotoxins. The degree of toxicity depends on the concentration of mold, amount of exposure, immune system function and certain genes that can increase your likelihood of developing mycotoxicosis.

Mycotoxins and Food
Mycotoxins are also commonly found growing on certain foods, such as grains, spices, cheese, beer and wine and fruits and vegetables. Certain mycotoxins are carcinogenic and can have severe adverse health effects, such as liver cancer or weakened immune systems.

One of the most common mycotoxins, ergot, was believed to be the cause of the Salem Witch Trials, when a crop of rye was infected with mold. Several teenage girls were accused of witchcraft after exhibiting strange behaviors. The main symptoms of ergot poisoning are hallucination and mania. Today, the effects of Mycotoxins on food are controlled and prevented by regulating the temperature and humidity of foods being stored or by treating crops with fungicide.

Symptoms of Mycotoxicosis
Mycotoxicosis symptoms may differ greatly from mold allergy symptoms. Toxicity symptoms may affect the kidneys, liver, lungs, GI tract and nervous system. You can reduce your mycotoxin exposure by inspecting your food before cooking or eating grains, nuts and dried fruit and throwing out food after the expiration date. When possible, avoid staying in buildings that have had water damage that have not been professionally treated. Why does Texas have such bad mold allergies?
The answer is not as clear-cut as just high humidity. There are several theories as to why Texas may have more mold allergies than other states. One theory is that mold spores may react to times of drought by increasing and distributing rapidly through moist air after we get rain. Scientists have identified a history of severe droughts using tree rings going as far back as 1697, when a 20 year drought hit Texas.

A second theory is that increased pollution has caused allergens to worsen over time. Not only does pollution directly cause those suffering from allergies to have worse symptoms by irritating lungs and nasal passages, but also affects the allergens directly. According to the EPA, Texas has consistently had the highest carbon dioxide emissions from fossil fuel combustion since 1990. Texas produces over twice as many CO2 emissions as California, the second highest producing state. One of the most common fungus known to trigger allergic reactions, Alternaria alternata, produces significantly more spores when in an area with high CO2. Increased temperatures also increase spore production as well. How to prevent mold allergies?
The best prevention for mold allergies indoors is eliminating any sources of dampness in your house. For mold allergies outside the house, be sure to monitor the pollen counts, and avoid going outside when they’re high, if you can. Wearing a mask while outside can also help, especially while doing yard work.

If avoiding mold is impossible, our Mold Relief Formula works for mold spores due to indoor or outdoor allergens, is easy to use and works great for kids and pets too.